Apter Fredericks had been operating from the same site in Chelsea since 1946 until September 2019. Here Bernard Apter, now in his eighties, explains a little about the company’s history:

Actually I first worked with my father in law Alfred Fredericks, known as Alfie, when the company was called A. Fredericks Chelsea Ltd. I joined him in business when I was 21 and married his daughter Carole Claire.

I then branched out on my own for 6 years and worked on the Kings Road where my shop was called Claire Galleries after my wife.

I joined forces with my father in law once again and after a year he made me a Director of the company, and because he regarded me as more of a son than a son in law, he renamed the business A Fredericks and Son.

After about ten years, Alfred Fredericks having retired, it was decided to change the name of the business to Apter Fredericks Ltd. It sounded better phonetically. 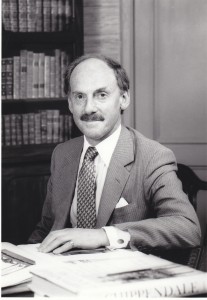 When I started in the business, we were a very big commercial dealer and sold 90% of our stock to the trade.  For example, Norman Adams called in every day to see what we had found.  They picked out what were the most saleable goods for them, and that is how I learnt what private buyers wanted.

In the 1980s my late wife and I made a conscious decision that we would need to buy in a more expensive market and thus our furniture would have to go direct to the public.  It worked well. Gradually the dealing with the trade fell away, and we began to get a private following. We had a lot of passing trade from the local Chelsea homeowners because furnishing with English antiques was very fashionable.

3. How do you think the market has changed over the last 60 years? 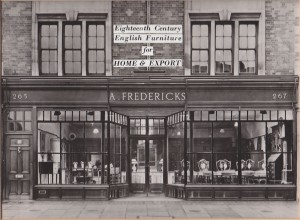 A. Fredericks shop front, used as an advert in the 1960s 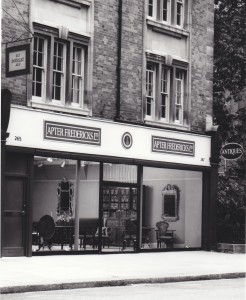 There is much less day to day activity than there was. Every Monday we used to view a plethora of London salerooms: Brompton Road, Putney Bridge, the Army and Navy Stores, Harrods Auction Rooms, etc. In the season we would buy weekly on a Thursday at Christies and on a Friday at Sotheby’s.

I spent a great deal of time travelling all around the country calling on regional dealers and viewing the sales.  There were many very good dealers, especially in cathedral cities and spa towns.  In those days the sales catalogues rarely had photographs so you had to acquire the skill of judging by description alone.

We were too busy buying and selling then to do all the academic research that my sons do now. It’s essential to do it today, but back then we just didn’t have the time.

The buying. The treasure hunt.

America always was, and still is, a strong market. However, besides selling to America, I began to buy in America some 30 years ago when only two or three other dealers were doing it. It was quite likely that some of the goods bought in America would then be sold back to America!

The family did the selling.  My wife had a tremendous knack for it and thus I could concentrate on the buying.  Sometimes she couldn’t comprehend why I’d bought certain things, until she explained the virtues of them to the customer, at which point she realised why I’d bought them!  We were a good team.

To value the form, outline and beauty of the workmanship, and to appreciate the fact that the pieces have been lived with for 200 years and yet are still useable today.