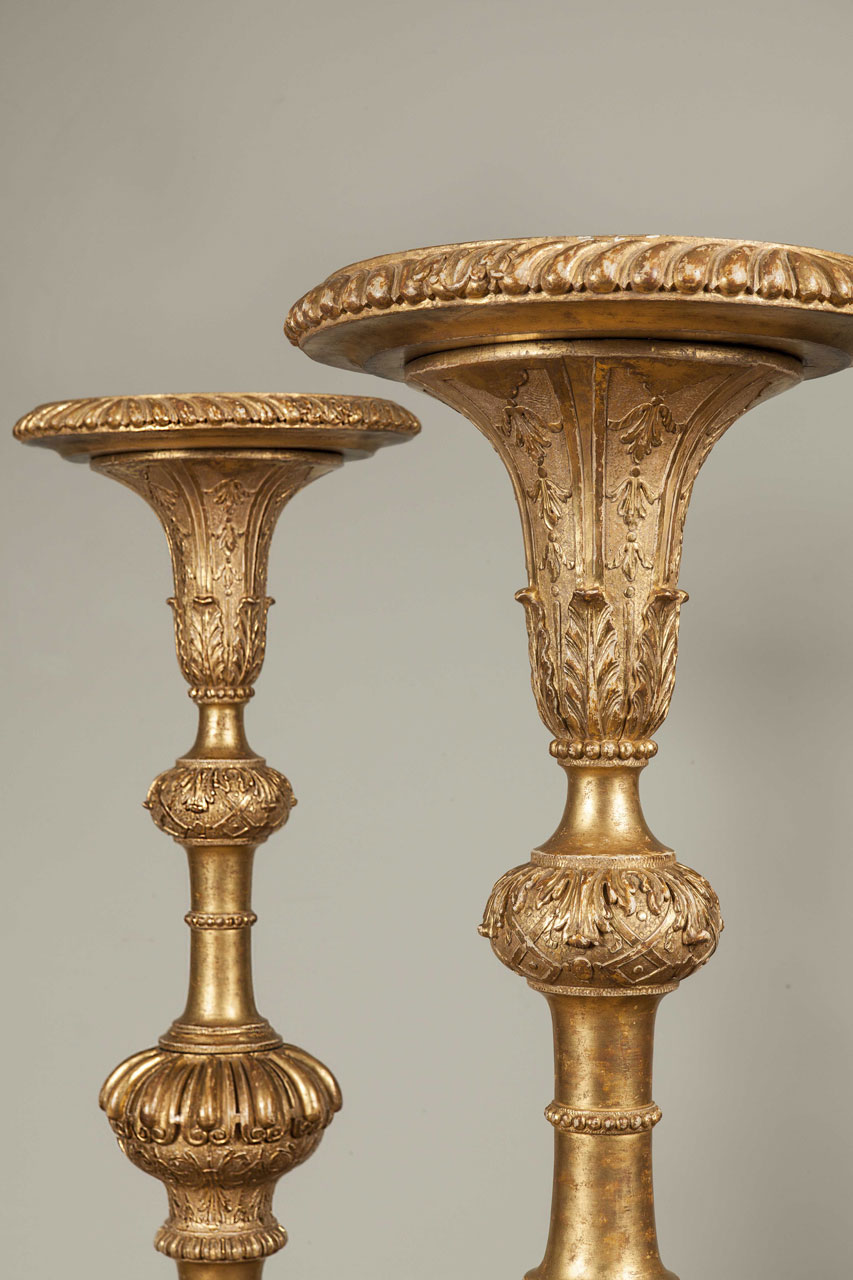 Some of our clients may not realise that the production of our annual catalogue takes months of preparation. The photography shoots, the wording of the text and the in depth research has begun already, even though the catalogue is not published until late spring.

One of our greatest ongoing challenges in doing the research for our brochure is establishing the original houses that our furniture was made for. But why is this?

There are various reasons. 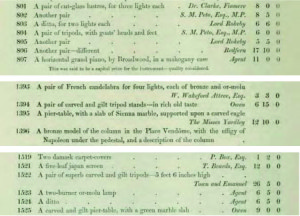 An Extract from the Christie’s catalogue of the Stowe sale of 1848…please note the unhelpful descriptions!

First, we look to eighteenth century house inventories. Paintings were often listed by title and artist, making them easily identifiable. Unfortunately when furniture was listed, it might have been described simply as “A Pair of Side Tables” or “Gilt Candlestands”. This vagueness and lack of detail is hardly conducive to later exact identification.

Unfortunately, early auction catalogues are often no more help. The largest dispersal of decorative arts in this country occurred during the 1930s due to the economic circumstances of the times and the imposition of death duties, when owners of large houses needed to raise capital. Photography was only used for a small number of items in each auction catalogue. The remainder of items were listed, again with a very brief description, making later identification difficult. As an example, although taken from an earlier period, the Christie’s Catalogue from the sale of the contents of Stowe in 1848 included the descriptions “A noble pier table” and “A carved and gilt pier table. This is a very curious old piece of furniture”!

Furthermore, it is par for the course that the antiques trade had to accommodate discretion if owners did not want to advertise their need to sell, and on these occasions the history of the item was typically hidden. Even in my time in the business, we have purchased major works through agents, acting on behalf of titled families, who had been instructed not to reveal the provenance. 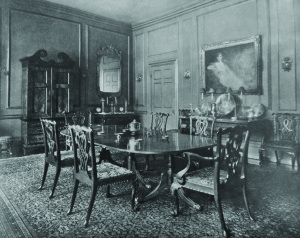 A view of Percival Griffith’s dining room at Sandridgebury, showing the mirrors currently in our inventory.

So where does that leave us?

It is necessary to alter one’s expectations.  In collecting English furniture today, the history of a piece subsequent to its original commission becomes far more important and relevant.  For example, for a piece to have been in one of the great collections formed in the first half of the twentieth centuries by the likes of Messer, Griffiths and Sykes, all advised by Symonds, now carries great kudos. Interestingly, all pieces included in any of these collections were selected for their rarity, their colour, patination and form, all the characteristics by which we judge the furniture we are buying and selling. Although the original provenance might well have been known at the time the item entered one of these collections, it was not necessarily recorded! Whilst on occasion the provenance was concealed by dealers protecting their source it is certainly true that provenance was not the measure by which an item was judged. A piece of furniture stood or fell on its own merits and not by whom it was commissioned. It is for this reason that furniture from these collections is so highly prized regardless of not knowing its former history. 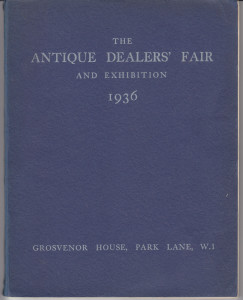 Likewise, discovering items illustrated in exhibition catalogues also carries weight and value. To discover an item illustrated in a handbook of the Grosvenor House Antiques Fair (arguably the World’s first fully vetted and most prestigious antiques event from 1936 through to 2009) is of great significance and should certainly not be under-estimated. 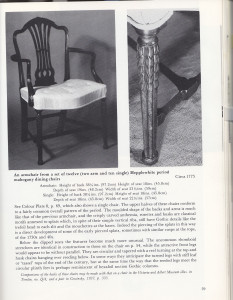 Apart from fair and exhibition catalogues, dealers such as Apter-Fredericks have produced catalogues illustrating the furniture they have for sale. When subsequently resold by others, our names are added to the provenance, testament to the respect in which dealers such as ourselves are held. Put simply, by handling a piece we are authenticating it and we are marking it out as a piece that meets our high standards. This adds to its provenance.

Finding the original house for which a piece was made may seem like an impossible task but it is achievable on occasion. Sometimes we discover a bill or an inventory that is detailed enough to be certain. This was most certainly the case with Mrs Hutton Rawlinson’s Bookcase which will feature in a future article where we will discuss some of the discoveries we have made.

We would reassure clients that research is always ongoing and on occasion we do have success even after we sell an item.  We are continually buying catalogues of old house sales, exhibition catalogues and dealers’ brochures. On a fairly regular basis, possibly years after selling a piece, we will discover an item illustrated in one of these catalogues and will then be able to go back to the client with the good news.

For me, the research is one of the most exciting tasks of our year. The detective work, the red herrings, the discoveries, even the frustration of getting so close to a provenance or a maker but not quite, are one of the joys of being an antiques dealer and of course, there is the enormous amount one learns by writing our catalogues.

If this has piqued your interest and you would like to be notified of our next article or when our next catalogue is published please register here.

1700 to 1850: one hundred and fifty years of furniture manufacture in England. Yet we blithely describe ourselves as dealers in 18th & early 19th century antiques with no mention of the monumental changes that took place in both the design of, and the materials used, in furniture making during this period.

The furniture of the 1700s was generally made of native woods like oak, elm, ash and walnut, and looked entirely different to the furniture made out of a multitude of imported woods in the 1800s.  And between those years there were two neo classical periods, a rococo period, and smattering of Egyptian, Greek, Chinese and French influence to say the least 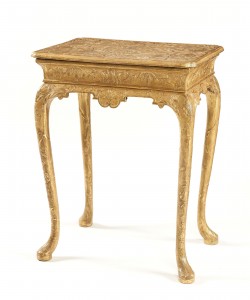 With the exception of farming, the furniture making industry employed more people than any other occupation at this time.  It was big business. It was dynamic and it was driven by a clientele who were exacting, educated and wealthy.  Like today, there was the desire for the latest trend, the newest material, the one of a kind and, of course, the showing off.

It is hard to imagine how shocking it must have been to have entered a room in the first quarter of the eighteenth century and to see for the first time a table entirely covered in gold. Where before there was dark wood in a candlelit house, now there was a ‘reflecting beacon’.  I imagine as many people would have been repulsed by this as liked it, but it certainly prevailed. 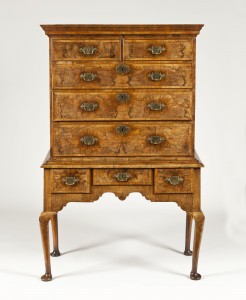 Furniture went from utilitarian to decorative in a very short length of time. The chest of drawers is a marvellous example. Originally a trunk, it moved from that to a chest, but a chest with little ornamentation until the very end of the 17th century.  Then in the eighteenth century,  its status had so improved that it was quite literally “elevated” – given legs – and thus became a focal point in the room. 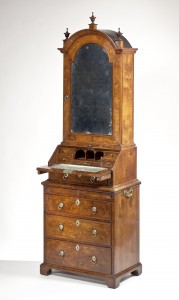 By the late 1730s indigenous walnut furniture began to be superseded by imported mahogany, a dark rich red wood.  Whilst walnut was soft and structurally weak, mahogany was the antithesis and changes in style were certainly assisted if not partly led by this stronger timber allowing for lighter designs to be made.  Put simply, friezes and even legs could be pierced with fretwork and still be structurally sound.

By the 1740s classicism was all the rage due to the clients, architects and artists returning from their Grand Tours. The ancient world had captivated not just England but the whole of Europe. However, these were early days and the language and motifs brought back by the likes of Lord Burlington and William Kent were not fully understood. 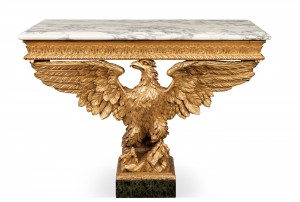 The resulting furniture was of a bolder and grander scale than we would see in the second wave of neo classicism some twenty years later – so superbly displayed at Spencer House for example, and in the work of architects like James Wyatt and Robert Adam.

By the third quarter of the eighteenth century, under the reign of King George III, one could say that furniture making in England had reached its zenith. 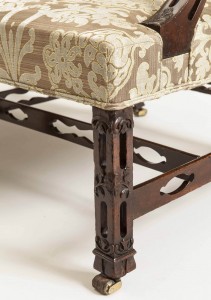 Detail of Settee with fretwork c. 1760

The work of famous cabinet makers such as Thomas Chippendale, Mayhew & Ince and Vile & Cobb includes many of the greatest pieces of furniture ever made in this country. However, within the oeuvre of Chippendale and his contemporaries, their work and style changed dramatically over the years from carved mahogany furniture of the 1750s to inlaid and ormolu mounted furniture of the 1780s. 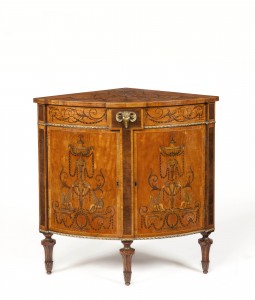 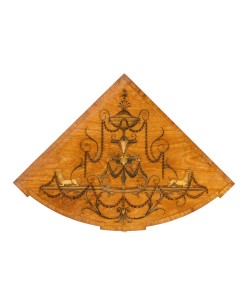 As the century drew to a close, so the foreign influences came thick and fast, sometimes in one project. Nothing illustrates this better than the Prince Regent’s Pavilion at Brighton. From the outside it has clearly been influenced by Indian architecture, whilst on the inside it is very strongly Chinese in style. Now whilst the Pavilion might be regarded as a rather extreme example, it is nevertheless fair to say that furniture in the Regency period drew inspiration from a multitude of sources. A French interpretation of classicism was propagated by one the most successful architects of the period, Henry Holland, but equally influential was the work of Thomas Hope and his Greek revivalist style.  The list could go on but suffice to say it was a fast moving designer or cabinet maker who could keep abreast of taste at this time. 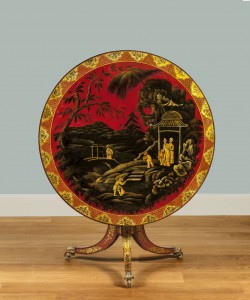 Our role is to guide clients and to explain the merits of one example from the period over another, which is distinct from selecting one style over another.  When I first joined the business I would wonder why my father had bought table A over table B, they seemed so similar and yet the difference of a half inch in the depth of the drawers would determine his decision.  That sort of eye for detail can be inherent, for others it can take time and guidance to develop. It is our role to help.

When it comes to what to buy, only our clients can decide which roads they want to go down.  All styles can be appreciated in their own right and crucially a plain table can be every bit as beautiful and artistically valuable as a highly ornate piece.  Thus one’s desire to own these two different forms might be poles apart, but one can appreciate both for the artistry involved throughout this fascinating period of furniture history.